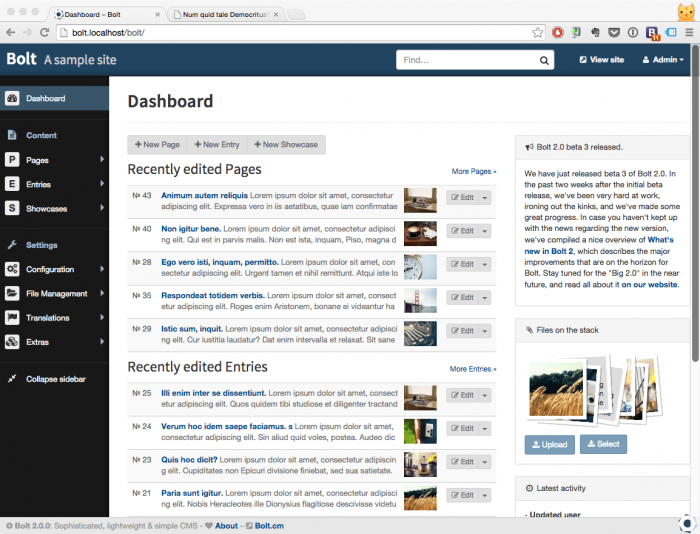 Hi there! We've just released Bolt 2.0. It's been a year in the making, and it took 7,300 commits and 121 contributors to get where we are now. This release embodies the growing up of our "Simple & Sophisticated" Content Management System. Version 1.x was pretty good, but over the past year a lot of smart people joined our steadily growing community, and these people were instrumental in getting Bolt to its current state.

Almost every library in Bolt was refactored to be cleaner, more readable and better to understand. At the same time, we've really invested in the "Standing on the shoulders of giants" principle. Instead of trying to 'invent the wheel', we rely on trusted, well-designed and thoroughly tested packages, like Symfony, Silex, Doctrine, Swiftmailer and a bunch of others. By doing this, we've both ensured our project to be very manageable, but we can also develop new features much quicker. For example: Bolt itself weighs in with just 10% of the codebase of Wordpress: 15,000 lines versus 141,000 lines respectively. This keeps it possible for us to keep the code in a good state, and minimizes our technical debt going forward.

Before we get to the nitty-gritty of this release, there's one more thing I'd like to mention: as of now, Bolt is officially a team effort. More and more of the code and features and bugfixes were made by our contributors. This release would have never been possible without the tireless contributions of people like Gawain, Ross, Reinier, Rix, Gerhard, Peter, Tobias, Xiao, Jared, Lodewijk, Anke, Andrew, Evert, Steven, Stefan, Thaís, Corentin, Marc, Melinda, Derk, Sebastiaan and all those others who've contributed code, extensions, themes and helped out on support.

If you're curious about the features in Bolt 2.0, take a look at our Features page. If you're coming from Bolt 1.0, there's page here that details the most important improvements over the previous version.

Apart from the Bolt 2.0 release itself, we've been slaving away at a few other things:

To get started with Bolt 2.0 itself, see the page Bolt installation in the docs, which details the various ways to install Bolt. We're sure you will like it!